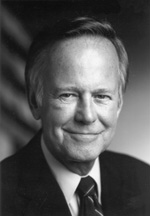 ADAMS, Brockman (Brock), a Representative and a Senator from Washington; born in Atlanta, Ga., on January 13, 1927; attended the public schools in Portland, Oreg.; graduated, University of Washington, Seattle 1949; graduated, Harvard Law School 1952; served in the United States Navy 1944-1946; admitted to the Washington State bar in 1952 and began practice in Seattle; taught law, American Institute of Banking 1954-1960; United States attorney for the Western District of Washington 1961-1964; elected as a Democrat to the Eighty-ninth and to the six succeeding Congresses and served from January 3, 1965, until his resignation on January 22, 1977; chairman, Committee on the Budget (Ninety-fourth Congress); Secretary of Transportation in the Cabinet of President Jimmy Carter 1977-1979; resumed the practice of law in Washington State; elected as a Democrat to the United States Senate in 1986, and served from January 3, 1987, to January 3, 1993; was not a candidate for reelection in 1992; was a resident of Stevensville, Md., until his death, due to complications of Parkinson’s disease, on September 10, 2004; interment in Broad Creek Cemetery in Stevensville.