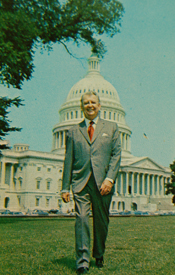 BURKE, J. Herbert, a Representative from Florida; born in Chicago, Ill., January 14, 1913; attended the public schools of Chicago, Ill.; attended Central Y.M.C.A. College in Chicago, Ill., and Northwestern University; graduated from Kent College of Law in 1940; served in the United States Army in the European Theater in 1942-1945, was awarded the Purple Heart, Bronze Star, the European Theater Medal, and the American Theater Ribbon, and was discharged with the rank of captain; admitted to the bar in 1940 and practiced in Chicago, 1940-1949, and Hollywood, Fla., 1949-1968; elected Republican commissioner in Broward County, Fla., in 1952 and served in that capacity until 1967; Republican State committeeman, 1954-1958; unsuccessful candidate for election to the Eighty-fourth Congress in a special election, January 11, 1955; delegate to Republican National Conventions from 1968 to 1976; member, Republican Platform Committee, 1968; appointed by President Eisenhower to Southeastern Advisory Board of Small Business in 1956; elected as a Republican to the Ninetieth and to the five succeeding Congresses; (January 3, 1967-January 3, 1979); unsuccessful candidate for reelection in 1978 to the Ninety-sixth Congress; was a resident of Falls Church, Va., and Fern Park, Fla., until his death in Altamonte Springs, Fla., on June 16, 1993.