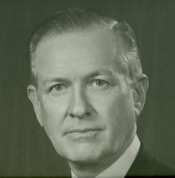 BURLESON, Omar Truman, a Representative from Texas; born in Anson, Jones County, Tex., March 19, 1906; attended the public schools, Abilene Christian College, and Hardin-Simmons University at Abilene, Tex.; was graduated from Cumberland University, Lebanon, Tenn., in 1929; was admitted to the bar the same year and commenced practice in Gorman, Tex.; county attorney of Jones County, Tex., 1931-1934; judge of Jones County, Tex., 1934-1940; special agent of the Federal Bureau of Investigation in 1940 and 1941; secretary to Congressman Sam Russell of Texas in 1941 and 1942; general counsel for the Housing Authority, District of Columbia, in 1942; served in the United States Navy from December 1942 to April 1946, with service in the South Pacific Theater; elected as a Democrat to the Eightieth Congress; reelected to the fifteen succeeding Congresses and served from January 3, 1947, until his resignation December 31, 1978; chairman, Committee on House Administration (Eighty-fourth through Ninetieth Congresses), Joint Committee on the Library (Eighty-fourth through Ninetieth Congresses), Joint Committee on Printing (Eighty-fourth Congress); was not a candidate for reelection in 1978 to the Ninety-sixth Congress; was a resident of Abilene, Tex., until his death there on May 14, 1991; interment in Mount Hope Cemetery, Anson, Tex.