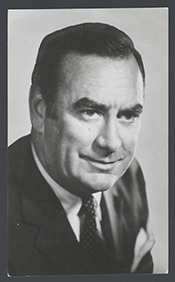 CAREY, Hugh Leo, a Representative from New York; born in Brooklyn, Kings County, N.Y., April 11, 1919; graduated from St. John’s College and from the law school of the same college, LL.B., 1951; admitted to the bar in 1951 and commenced the practice of law in Brooklyn, N.Y.; during the Second World War entered the United States Army as an enlisted man in the One Hundred First Cavalry, New York National Guard, serving in Europe as a major of infantry in the One Hundred Fourth Division; decorated with Bronze Star, Croix de Guerre, and Combat Infantry Award; State chairman, Young Democrats of New York, 1946; director and officer in several industrial companies; elected as a Democrat to the Eighty-seventh and to the six succeeding Congresses and served from January 3, 1961, until his resignation December 31, 1974; was not a candidate for reelection to the Ninety-fourth Congress, but was a successful candidate for Governor of New York; reelected in 1978 and served from January 1, 1975, until January 1, 1983; resumed the practice of law in New York City; died on August 7, 2011, in Shelter Island, N.Y.