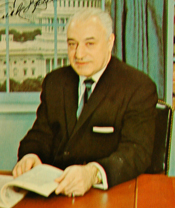 DANIELS, Dominick Vincent, a Representative from New Jersey; born in Jersey City, Hudson County, N.J., October 18, 1908; educated in the Jersey City public schools; attended Fordham University, New York City; graduated from Rutgers University Law School, New Brunswick, N.J., in 1929; was admitted to the New Jersey bar in 1930 and commenced the practice of law in Jersey City, N.J.; appointed magistrate of the Jersey City Municipal Court in May 1952, reappointed in 1955, and subsequently was appointed presiding magistrate, in which capacity he served until March 1958; delegate, Democratic National Conventions, 1960, 1964, and 1968; elected as a Democrat to the Eighty-sixth and to the eight succeeding Congresses (January 3, 1959-January 3, 1977); was not a candidate for reelection in 1976 to the Ninety-fifth Congress; returned to the practice of law in Jersey City; was a resident of Union City, N.J., until his death in Jersey City on July 17, 1987; interment in Holy Cross Cemetery, North Arlington, N.J.