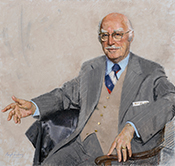 HOLIFIELD, Chester Earl, a Representative from California; born in Mayfield, Graves County, Ky., December 3, 1903; moved with his family to Springdale, Ark., in 1912; attended the public schools; moved to Montebello, Calif., in 1920 and engaged in the manufacture and selling of men’s apparel 1920-1943; chairman of the Los Angeles County Democratic Central committee of the Fifty-first District 1934-1938; chairman of the California State Central committee of the Twelfth Congressional District 1938-1940; delegate to each Democratic National Convention from 1940 to 1964; elected as a Democrat to the Seventy-eighth and to the fifteen succeeding Congresses and served from January 3, 1943, until his resignation December 31, 1974; was not a candidate for reelection in 1974 to the Ninety-fourth Congress; chairman, Committee on Government Operations (Ninety-first through Ninety-third Congresses), Joint Committee on Atomic Energy (Eighty-seventh, Eighty-ninth, and Ninety-first Congresses); member, President’s Special Evaluation Commission on Atomic Bomb Tests at Bikini Atoll, 1946; congressional adviser to international conferences on uses of atomic energy, nuclear weapons testing, water desalinization, and disarmament; resumed the manufacture and selling of men’s apparel; died February 6, 1995.