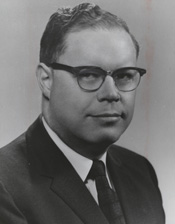 HUTCHINSON, J. Edward, a Representative from Michigan; born in Fennville, Allegan County, Mich., October 13, 1914; graduated from Fennville High School in 1932, from the University of Michigan in Ann Arbor in 1936, and from the law school of the same university in 1938; was admitted to the bar in 1938 and began the practice of law in Allegan, Mich.; enlisted as a private in the United States Army in January 1941, served as a noncommissioned officer in the Fourteenth Coast Artillery, as a captain in the Transportation Corps, and was discharged in April 1946; elected to the State house of representatives in 1946 and 1948; served as State senator, 1951-1960; a delegate to the 1948 Republican National Convention; chairman of the Republican State convention in April 1952; delegate and vice president, Michigan Constitutional convention, in 1961 and 1962; elected as a Republican to the Eighty-eighth and to the six succeeding Congresses (January 3, 1963-January 3, 1977); was not a candidate for reelection in 1976 to the Ninety-fifth Congress; was a resident of Fennville, Mich., until his death in Naples, Fla., on July 22, 1985; interment in Fennville Cemetery, Fennville, Mich.