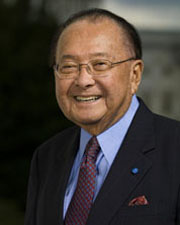 INOUYE, Daniel Ken, a Senator and a Representative from Hawaii; born in Honolulu, Hawaii, September 7, 1924; attended the public schools of Honolulu; during the Second World War volunteered as a private in 1943 and retired after much action as a captain in 1947; belatedly received the Congressional Medal of Honor on June 21, 2000, for heroism in battle during Second World War; graduated, University of Hawaii 1950 and George Washington University Law School 1952; admitted to the bar in 1953 and commenced practice in Honolulu; assistant public prosecutor in Honolulu 1953-1954; majority leader in the Territorial house of representatives 1954-1958; member of the Territorial senate 1958-1959; upon the admission of Hawaii into the Union was elected as a Democrat to the Eighty-sixth Congress for the term commencing August 21, 1959; reelected to the Eighty-seventh Congress and served until January 3, 1963; was not a candidate for renomination to the House of Representatives in 1962, but was elected to the United States Senate in 1962; reelected in 1968, 1974, 1980, 1986, 1992, 1998, 2004 and again in 2010 for the term ending January 3, 2017; president pro tempore (June 28, 2010-December 17, 2012); chair, Select Committee on Intelligence (Ninety-fourth and Ninety-fifth Congresses), Committee on Indian Affairs (One Hundredth to One Hundred Third Congresses; One Hundred Seventh Congress [January 3-20, 2001; June 6, 2001-January 3, 2003]), Select Committee on Secret Military Assistance to Iran and the Nicaraguan Opposition (One Hundredth Congress), Committee on Commerce, Science and Transportation (One Hundred Tenth Congress), Committee on Appropriations (One Hundred Eleventh and One Hundred Twelfth Congresses); died on December 17, 2012; lay in state in the Rotunda of the U.S. Capitol, December 20, 2012; interment in the National Memorial Cemetery of the Pacific, Honolulu, Hawaii; posthumously awarded the Presidential Medal of Freedom on November 20, 2013.