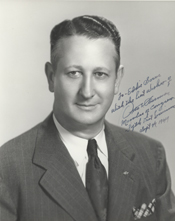 PASSMAN, Otto Ernest, a Representative from Louisiana; born on a farm near Franklinton, Washington Parish, La., June 27, 1900; was graduated from Baton Rouge (La.) High School and from Soule Business College at New Orleans, La.; in 1929 engaged in the manufacture of commercial refrigerators, and as a distributor of hotel and restaurant supplies and electrical appliances at Monroe, La.; owner Passman Investment Company; during the Second World War was commissioned a lieutenant in the United States Navy and served from October 11, 1942, until his discharge as lieutenant commander on September 5, 1944; resumed the mercantile business; delegate, Democratic National Conventions, 1948, 1952, and 1956; elected as a Democrat to the Eightieth and to the fourteen succeeding Congresses (January 3, 1947-January 3, 1977); unsuccessful candidate for renomination in 1976 to the Ninety-fifth Congress; was a resident of Monroe, La., until his death there on August 13, 1988; interment in Mulhearn Memorial Park Cemetery, Monroe, Quachita Parish, La.