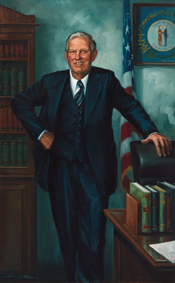 PERKINS, Carl Dewey, (father of Carl Christopher Perkins), a Representative from Kentucky; born in Hindman, Knott County, Ky., October 15, 1912; attended the Knott County grade schools, Hindman High School, Caney Junior College (now Alice Lloyd College), Lees Junior College, and was graduated from Jefferson School of Law (now the University of Louisville Law School), Louisville, Ky., in 1935; was admitted to the bar in 1935 and commenced the practice of law in Hindman, Ky.; in 1939 served an unexpired term as commonwealth attorney from the thirty-first judicial district; member of Kentucky General Assembly from the ninety-ninth district in 1940; elected Knott County attorney in 1941, reelected in 1945, and resigned January 1, 1948, to become counsel for Department of Highways, Frankfort, Ky.; during the Second World War enlisted in the United States Army and saw service in the European Theater; elected as a Democrat to the Eighty-first and to the seventeen succeeding Congresses and served from January 3, 1949, until his death; chairman, Committee on Education and Labor (Ninetieth through Ninety-eighth Congresses); was a resident of Hindman, Ky. until his death August 3, 1984, in Lexington, Ky.; interment in Perkins Cemetery, Leburn, Ky.