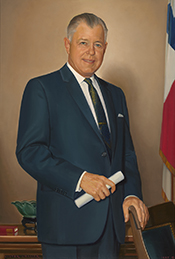 POAGE, William Robert, a Representative from Texas; born in Waco, McLennan County, Tex., December 28, 1899; in 1901 moved to Throckmorton County, Tex., with his parents, who settled near Woodson; attended the rural schools of Throckmorton County, Tex.; during the First World War served as an apprentice seaman in the United States Navy; attended the University of Texas in Austin and the University of Colorado at Boulder; Baylor University, Waco, Tex., A.B., 1921; engaged in agricultural pursuits 1920-1922; instructor in geology at Baylor University 1922-1924; law department of Baylor University, LL.B., 1924; was admitted to the bar the same year and commenced practice in Waco, Tex.; instructor in law at Baylor University 1924-1928; member of the State house of representatives 1925-1929; served in the State senate 1931-1937; delegate, Texas State Democratic convention, 1922; delegate, Democratic National Conventions, 1956, 1960, and 1964; elected as a Democrat to the Seventy-fifth Congress; reelected to the twenty succeeding Congresses and served from January 3, 1937, until his resignation December 31, 1978; chairman, Committee on Agriculture (Ninetieth through Ninety-third Congresses); was not a candidate for reelection in 1978 to the Ninety-sixth Congress; was a resident of Waco, Tex., until his death in Temple, Tex., on January 3, 1987; interment in Oakwood Cemetery, Waco, Tex.