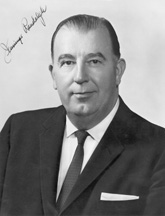 RANDOLPH, Jennings, a Representative and a Senator from West Virginia; born in Salem, Harrison County, W.Va., March 8, 1902; attended the public schools; graduated from the Salem (W.Va.) Academy in 1920 and Salem (W.Va.) College in 1924; engaged in newspaper work in Clarksburg, W.Va., in 1924; associate editor of West Virginia Review at Charleston in 1925; head of the department of public speaking and journalism at Davis and Elkins College at Elkins, W.Va., 1926-1932; trustee of Salem College and Davis and Elkins College; unsuccessful candidate for election in 1930 to the Seventy-second Congress; elected as a Democrat to the Seventy-third and to the six succeeding Congresses (March 4, 1933-January 3, 1947); unsuccessful candidate for reelection in 1946 to the Eightieth Congress; chairman, Committee on the District of Columbia (Seventy-sixth through Seventy-ninth Congresses), Committee on Civil Service (Seventy-ninth Congress); professor of public speaking at Southeastern University, Washington, D.C., 1935-1953, and dean of School of Business Administration 1952-1958; assistant to president and director of public relations, Capital Airlines, Washington, D.C., February 1947-April 1958; elected in a special election on November 4, 1958, as a Democrat to the United States Senate to fill the vacancy caused by the death of Matthew M. Neely; reelected in 1960, 1966, 1972 and 1978 and served from November 5, 1958, to January 3, 1985; did not seek reelection; chairman, Committee on Public Works (Eighty-ninth through Ninety-fifth Congresses), Committee on Environment and Public Works (Ninety-fifth and Ninety-sixth Congresses); died in St. Louis, Mo., on May 8, 1998; interment in Seventh-Day Baptist Cemetery, Salem, Harrison County, W.Va.