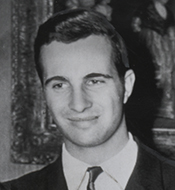 REID, Ogden Rogers, a Representative from New York; born in New York City, June 24, 1925; student, Deerfield Academy, 1940-1943; Yale University, A.B., 1949; fellow of Brandeis University and Bar-Ilan University, Israel; associated with the New York Herald-Tribune as president of Societe Anonyme and president, editor and director, 1953-1959; enlisted as a private in the United States Army in 1943 and discharged as a first lieutenant in 1946; captain, United States Army Reserve, inactive; United States Ambassador to Israel, 1959-1961; chairman, New York State Commission for Human Rights, 1961-1962; trustee, Hampton Institute; member of advisory council, School of International Affairs, Columbia University; vice president of National Institute of Social Sciences; director of Atlantic Council of the United States; elected as a Republican to the Eighty-eighth and to the four succeeding Congresses; changed party affiliation to Democrat effective March 22, 1972; reelected as a Democrat to the Ninety-third Congress (January 3, 1963-January 3, 1975); was not a candidate for reelection in 1974 to the Ninety-fourth Congress, but was a candidate for nomination for Governor of New York until he withdrew from the race; commissioner of Environmental Conservation for the State of New York from January 1975 to May 1976; is a resident of Purchase, N.Y.