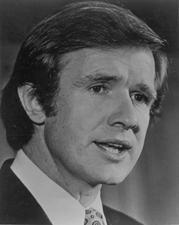 RIEGLE, Donald Wayne, Jr., a Representative and a Senator from Michigan; born in Flint, Genesee County, Mich., February 4, 1938; attended public schools of Flint, Mich.; attended Flint Junior College and Western University; graduated, University of Michigan 1960; received a graduate degree from Michigan State University 1961; pursued graduate studies at Harvard Business School; businessman; faculty member, Michigan State University, Boston University, and Harvard University; elected as a Republican to the Ninetieth Congress in 1966; reelected to the three succeeding Congresses; changed party affiliation to Democrat in 1973; reelected as a Democrat to the Ninety-fourth Congress and served from January 3, 1967, until his resignation December 30, 1976; was not a candidate for reelection to the House of Representatives, but was elected in 1976 to the United States Senate for the term commencing January 3, 1977; subsequently appointed by the Governor, December 30, 1976, to fill the vacancy caused by the death of Philip A. Hart for the term ending January 3, 1977; reelected in 1982 and 1988 and served from December 30, 1976, to January 3, 1995; was not a candidate for reelection in 1994; chairman, Committee on Banking, Housing and Urban Affairs (One Hundred First through One Hundred Third Congresses); joined Shandwick Public Affairs in Washington, D.C., serving as executive committee chair 1995; adjunct professor, Michigan State University School of Business, 1995; is a resident of Washington, D.C.