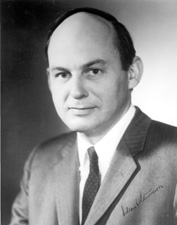 STEVENSON, Adlai Ewing III, (great-grandson of Vice President Adlai Ewing Stevenson), a Senator from Illinois; born in Chicago, Cook County, Ill., October 10, 1930; attended grammar schools in Illinois and Milton Academy, Massachusetts; graduated from Harvard College in 1952, and from the law department of the same university in 1957; entered United States Marine Corps as a private in 1952, served as a tank platoon commander in Korea, discharged as a first lieutenant in 1954 and from the Reserves in 1961 with the rank of captain; law clerk to justice of Illinois Supreme Court 1957-1958; admitted to the bar in 1957 and commenced practice in Chicago, Ill.; member, Illinois house of representatives 1965-1967; treasurer, State of Illinois 1967-1970; elected in a special election on November 3, 1970, as a Democrat to the United States Senate to fill the unexpired term caused by the death of United States Senator Everett M. Dirksen; reelected in 1974, and served from November 17, 1970, to January 3, 1981; was not a candidate for reelection in 1980; chairman, Select Committee on the Senate Committee System (Ninety-fourth Congress), Select Committee on Ethics (Ninety-fifth and Ninety-sixth Congresses); resumed the practice of law; unsuccessful Democratic candidate for governor of Illinois in 1982 and 1986; discontinued practice of law in 1992; founded and served as chairman of investment banking firm of SCM Investment Management 1992-; is a resident of Hanover, Ill.