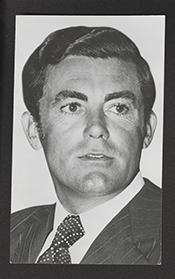 GREEN, William Joseph, (son of William Joseph Green, Jr.), a Representative from Pennsylvania; born in Philadelphia, Pa., June 24, 1938; attended St. Joseph’s Prep School; B.A., St. Joseph’s College, 1960; attended Villanova Law School; elected chairman of the Philadelphia County Executive Committee; elected as a Democrat, by special election, April 28, 1964, to the Eighty-eighth Congress to fill the vacancy caused by the death of his father, William Joseph Green, Jr.; reelected to the six succeeding Congresses and served from April 28, 1964, until January 3, 1977; was not a candidate in 1976 for reelection to the Ninety-fifth Congress but was an unsuccessful candidate for election to the United States Senate; elected Mayor of Philadelphia in 1979 and served from January 7, 1980, to January 2, 1984; was not a candidate for reelection in 1983; resumed the practice of law; is a resident of Philadelphia, Pa.