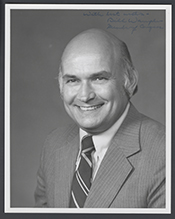 WAMPLER, William Creed, a Representative from Virginia; born in Pennington Gap, Lee County, Va., April 21, 1926; attended the public schools in Bristol, Va.; enlisted on May 21, 1943, in the United States Navy as a seaman and served for twenty-seven months until discharged September 29, 1945; member of the Naval Reserve, V-6; resumed his education and was graduated from Virginia Polytechnic Institute, Blacksburg, Va., in 1948 and studied law at the University of Virginia 1948-1950; reporter, Bristol, Va.-Tennessean in 1950 and 1951; reporter, editorial writer, Big Stone Gap (Va.) Post 1951; reporter, copy editor, Bristol Herald Courier in 1951 and 1952; member of board of visitors of Emory and Henry College, Emory, Va.; Republican assistant campaign manager for Ninth Congressional District elections in 1948; president of the Young Republican Federation of Virginia in 1950 and served as keynote speaker and permanent chairman of the Ninth District Republican Convention the same year; elected as a Republican to the Eighty-third Congress (January 3, 1953-January 3, 1955); was an unsuccessful candidate for reelection in 1954 to the Eighty-fourth Congress; with Atomic Energy Commission from January 1955 to March 1956; unsuccessful candidate for election in 1956 to the Eighty-fifth Congress; vice president and general manager of Wampler Brothers Furniture Co., Bristol, Va., 1957-1960; vice president and general manager of Wampler Carpet Co., 1961-1966; elected to the Ninetieth and to the seven succeeding Congresses (January 3, 1967-January 3, 1983); was an unsuccessful candidate for reelection in 1982; appointed to the Board of Visitors of Viriginia Polytechnic Institute, Blacksburg, Va., 1978-1982; businessman; died on May 23, 2012, in Bristol, Va.; internment at Mountain View Cemetery in Bristol, Va.