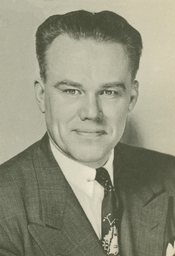 WIDNALL, William Beck, a Representative from New Jersey; born in Hackensack, Bergen County, N.J., March 17, 1906; attended the public schools; Brown University, Providence, R.I., Ph.B., 1926 and from the New Jersey Law School (now part of Rutgers University), LL.B., 1931; was admitted to the bar in 1932 and commenced the practice of law in Hackensack, N.J.; member of the State house of assembly 1946-1950; delegate, Republican National Convention, 1968; elected as a Republican to the Eighty-first Congress, by special election, February 6, 1950, to fill the vacancy caused by the resignation of J. Parnell Thomas; reelected to the twelve succeeding Congresses and served from February 6, 1950, until his resignation December 31, 1974; unsuccessful candidate for reelection in 1974 to the Ninety-fourth Congress; chairperson of the National Commission on Electronic Fund Transfers from November 1975 to 1981; was a resident of Ridgewood, N.J., until his death there December 28, 1983; interment in Gate of Heaven Cemetery, Hawthorne, N.Y.