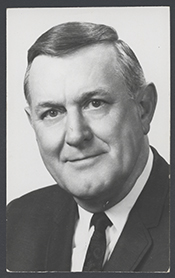 WILLIAMS, Lawrence Gordon, a Representative from Pennsylvania; born in Pittsburgh, Pa., September 15, 1913; moved to Philadelphia in June of 1922; graduated from Frankfort High School, and attended Drexel Institute of Technology; was a commissioner, 1952-1966, and president of the board, 1960-1966, township of Springfield, Pa.; employed by the Curtis Publishing Co., 1936-1966, and retired as assistant to the senior vice president in charge of manufacturing; served in the Army Air Corps during the Second World War; Delaware County’s representative on the policy committee on the Penn-Jersey Transportation Study, 1959-1966, Delaware Valley Regional Planning Commission, and the Southeastern Pennsylvania Transportation Authority; past president of the Pennsylvania State Association of Township Commissioners; elected as a Republican to the Ninetieth and to the three succeeding Congresses (January 3, 1967-January 3, 1975); unsuccessful candidate for renomination in 1974 to the Ninety-fourth Congress; appointed by President Gerald Ford as special assistant to the Cochairman of the Ozarks Regional Commission and served in that capacity from January 20, 1975, until his death; resided in Springfield, Pa.; died in Philadelphia, Pa., July 13, 1975; interment in Edgewood Memorial Park, Concordville, Pa.