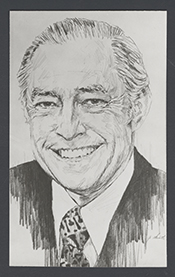 WILSON, Charles Herbert, a Representative from California; born in Magna, Salt Lake County, Utah, February 15, 1917; with his parents, moved to Los Angeles, Calif., in 1922 and attended the public schools there and in Inglewood; employee of a bank, 1935-1942; staff sergeant, United States Army, June 1942 to December 1945, with overseas service in the European Theater of Operations; in 1945, established an insurance agency in Los Angeles, Calif.; served in the California state legislature, 1954-1962, as assemblyman from the Sixty-sixth Assembly District; elected as a Democrat to the Eighty-eighth and to the eight succeeding Congresses (January 3, 1963-January 3, 1981); reprimanded by the U.S. House of Representatives on October 13, 1978, for making a false statement to the Ethics Committee investigating the Korean influence matter; censured by the U.S. House of Representatives on June 10, 1980, for financial misconduct and payroll fraud; unsuccessful candidate for renomination to the Ninety-seventh Congress in 1980; was a resident of Tantallon, Md., until his death in Clinton, Md., on July 21, 1984; interment in Inglewood Park Cemetery, Inglewood, Calif.