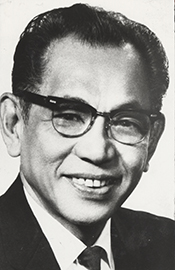 WON PAT, Antonio Borja, a Delegate from Guam; born in Sumay, Guam, December 10, 1908; educated in Guam public schools; became school teacher in 1926; principal in the school systems of Piti, Inarajan, and Sumay, 1934-1939; taught school at George Washington High School, Agana, Guam, from 1940 until end of the Second World War; first elected to the Advisory Guam Congress in 1936; reelected in 1948 as speaker of the Guam Assembly; speaker of the first, second, fourth, fifth, sixth, and seventh Guam Legislatures; elected in 1965 as Guam’s first representative to Washington; reelected to the same position in 1968; delegate, Democratic National Convention, 1972; elected as a Democrat to the Ninety-third and to the five succeeding Congresses (January 3, 1973-January 3, 1985); unsuccessful candidate for reelection to the Ninety-ninth Congress in 1984; was a resident of Sinajana, Guam until his death May 1, 1987, in Silver Spring, Md.; interment in Veterans Cemetery, Piti, Guam.