Learning Legislation: Your Guide To How A Bill Becomes A Law

The conventional wisdom has long been that laws are like processed food: you don’t want to see how they’re made. An unwillingness to investigate processed food, however, has exposed the public to serious health risks; failing to understand legislation may be similarly risky. Thus as American citizens, we must study our nation’s legislative process and understand how bills become laws: 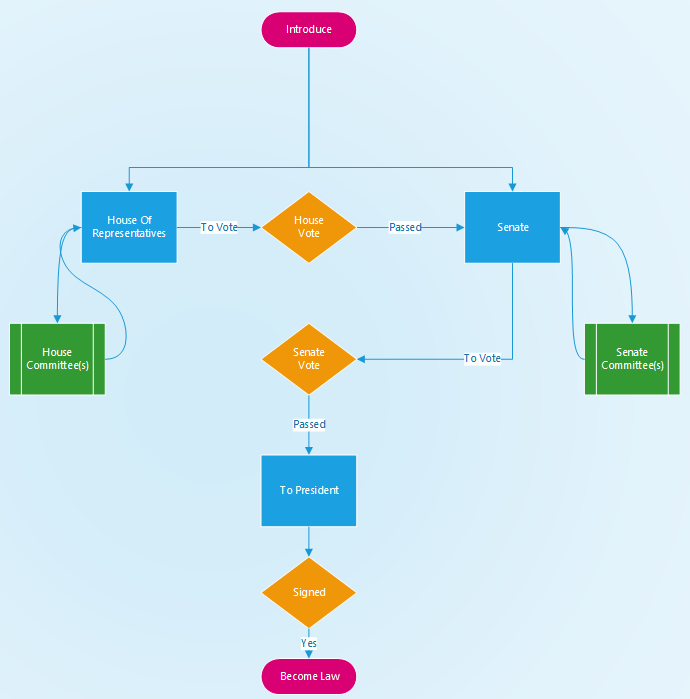 The first step in passing a law is simply to introduce an idea as a bill in Congress. Although anyone can come up with legislative proposals, only elected members of the Senate and the House of Representatives can formally propose them. In the House, representatives introduce bills by placing them in a box called the hopper or on the Speaker of the House's platform. Senators can introduce bills by presenting them on the Senate Floor or by giving them to the Senate’s presiding officer. After being introduced, bills undergo first readings and are then referred to the appropriate committees.

Congressional committees often have subcommittees designed to investigate particular legislative subjects. Once committee members have finished examining and amending a bill, they vote to either approve or table it. Tabled bills usually are not passed by Congress, while bills that are approved go to the floor for a full vote.

Once a bill is on the floor, its current text is read for the consideration of the chamber's members. Members then have the opportunity to debate the bill’s merits and offer amendments before a final vote. In the House of Representatives, a simple majority vote is enough to approve a bill.

In theory, Senate bills also require only a simple majority, but cloture is necessary for the Senate to vote on bills. At least 60 Senators must vote for cloture; otherwise, opponents of the bill can filibuster it indefinitely. Thus in practice, a bill needs 60 votes to pass the Senate, though Senators sometimes vote for cloture on a bill but then vote against passing it. Certain items, such as bills passed under budget reconciliation, cannot be filibustered and thus only require simple majority support. Because the Senate has 100 members, it is possible for the Senate vote to be tied, in which case the Vice President can cast a tie-breaking vote.

The Senate and House consider legislation separately, but both must approve bills for them to become laws. Thus after a bill has passed one chamber, it must go to the other. The second chamber can simply approve the first’s bill without alteration. If it changes the text, however, the bill goes to a conference committee composed of both House and Senate members. The committee seeks to reconcile the two bills, producing a final version that both chambers will pass. If both the Senate and the House approve this new bill, it goes to the president.

The final step in the legislative process is for the President of the United States to sign bills that Congress has passed. If the president signs a bill, it immediately becomes law. The president has the power, however, to veto a bill, in which case it only becomes law if two-thirds of the members of both houses vote for it.

Given that few bills that are controversial enough to be vetoed also have the support of two-thirds of Senators and Representatives, it is rare for vetoed bills to become law. Nonetheless, Congress has overturned presidential vetoes one hundred and six times in US history, notably under presidents:

The veto gives the president enormous power over legislation. Even though presidents cannot introduce or vote on bills in Congress, the House and Senate craft legislation with his or her opinions in mind. Thus the president plays a key role in the legislative process, albeit indirectly.